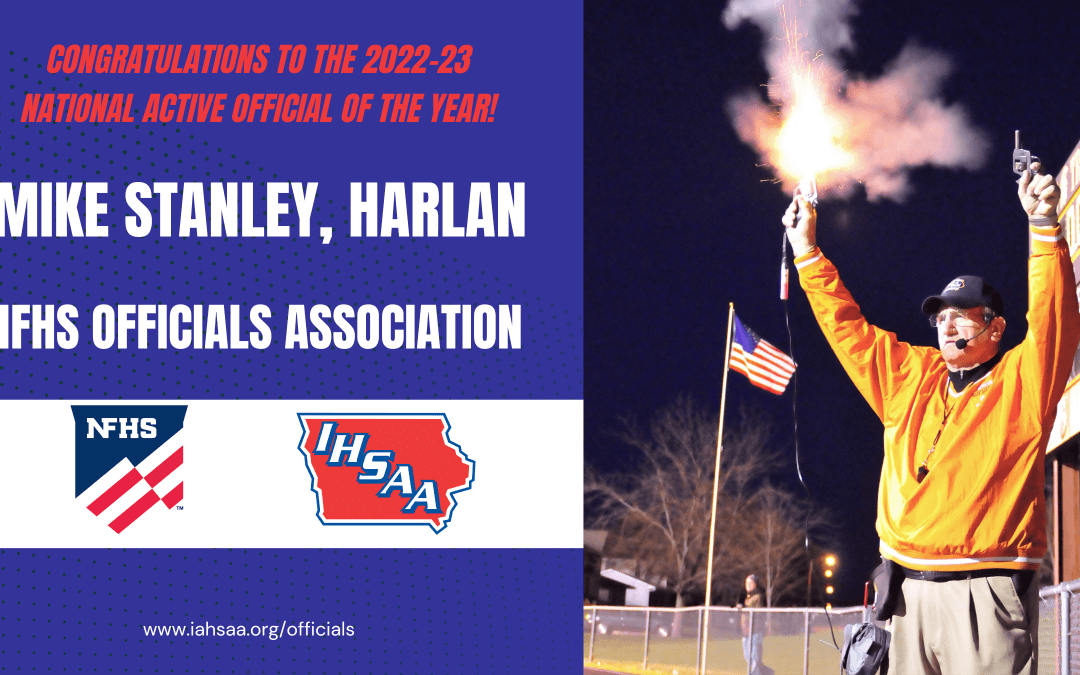 BOONE, Iowa – The Iowa High School Athletic Association is honored to announce Mike Stanley of Harlan as the NFHS Officials Association’s selection for National Active Official of the Year in 2022-23.

Stanley has been registered as an IHSAA official since 1970, plus two years of umpiring during his college days. The 2022-23 athletic year marks 44 years for him as a registered official for boys’ and girls’ track and field, plus 42 in boys’ and girls’ basketball, football, and volleyball. Track and field registration includes cross country in Iowa, and Stanley has been as decorated and respected as any official across both events.

“Mike Stanley’s name is synonymous with high school track and field in Iowa,” IHSAA director of officials Lewie Curtis said. “His excellence as an official is unparalleled and he is most deserving of this prestigious award. Mike’s service to the youth of Iowa is seen not only through his life’s work as an educational leader, but also as a sports official.”

As a career educator and administrator, mostly across southwest Iowa – Carson-Macedonia, Midland, Underwood, Malvern, Bedford, and AHST – Stanley has been essential in overseeing countless responsibilities in Iowa high school activities, including serving on the IGHSAU Board of Directors and as past president of the Iowa Association of Track & Officials.

He served as co-editor of the IATO’s Track and Field Procedures Manual, which was picked up by IHSAA and IGHSAU and approved for national use by NFHS. And his time as a meet starter and referee spanned from the IHSAA and IGHSAU’s independent state track and field meets, through all 18 editions of the coed meet. Stanley estimates he has led over 60 state qualifying meets in track and field as a starter, plus 10 years as a referee for the state cross country meet.

“The recognition of Mike Stanley as the National Active Official of the Year is proof positive of the outstanding officials working for the betterment of our high school sports and the student-athletes who play them,” Curtis said.

Next week (Jan. 30 to Feb. 4) also marks NFHS Winter Officials Appreciation Week. Member schools have been sent information on highlighting and celebrating officials who serve winter sports –basketball, wrestling, swimming – at their schools, and IHSAA will post officiating-related content throughout the week on social media.

Below are 2022-23 selections, as submitted to the NFHS Officials Association, for 2022-23 Iowa Sport Official of the Year.

GO TO OFFICIALS
HOW TO BECOME ONE