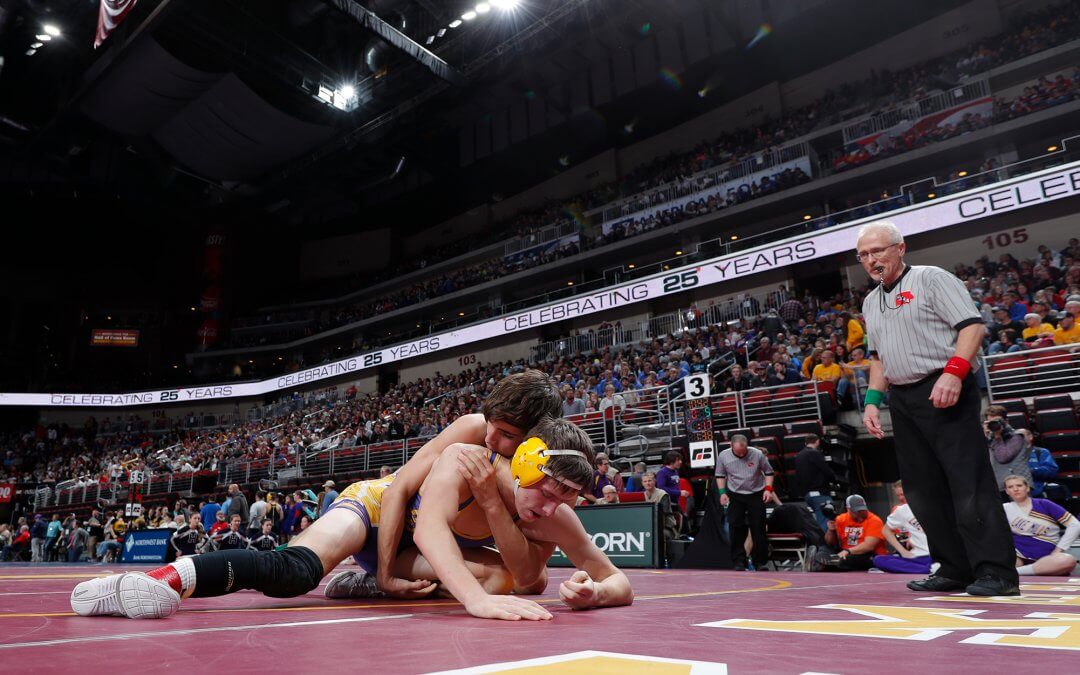 BOONE, Iowa – With COVID-19 precautions and attendance restrictions in place, the Board of Control determined Thursday to conduct the 2021 IHSAA State Wrestling Championships as currently scheduled at Wells Fargo Arena in Des Moines.

The state dual team tournament (Wednesday) and state traditional tournament (Thursday, Friday, Saturday) remain planned to run in their usual sessions and formats from February 17-20. Competition and spectator guidelines for these IHSAA events will continue to follow the most updated proclamations and guidance with state and local government officials, and Iowa Events Center.

“The IHSAA is grateful to all those who have worked to make this wrestling season possible,” IHSAA executive director Tom Keating said. “The board feels strongly that the traditional schedule can be safely completed for the largest possible competition and audience at each day of the 2021 IHSAA State Wrestling Championships.”

Details on football and wrestling attendance are below.

The Board of Control approved and accepted the lone recommendation out of recent meetings of the joint IHSAA and IGHSAU classification committee, adding one classification of football ahead of the 2021 season.

The new classification will be Class 5A, adding an 11-player group to reduce the disparity in enrollment in the IHSAA’s largest class of football, and to increase the number of participating teams and student-athletes in the postseason.

The board approved separate scheduling and playoff plans across the seven football classifications:

Teams in 2A, 1A, A, and 8P will be permitted to play a ninth regular season contest should they not qualify for the postseason.

Additional information regarding playoff qualification and district assignments will be released at a later date.

Member schools will be contacted to confirm BEDS data; questions or concerns must be directed to the Iowa Department of Education and the IHSAA.

Ticketing information for each date will be announced by the IHSAA and Iowa Events Center as it becomes available. Participating member schools will be contacted first for purchasing options.

Cheerleaders will be unable to attend the state traditional tournament as event performers due to space limitations.

Further details on attendance and entry for member schools, credentialed media, and event personnel will be announced as they become available.

GO TO WRESTLING
GO TO NEWS