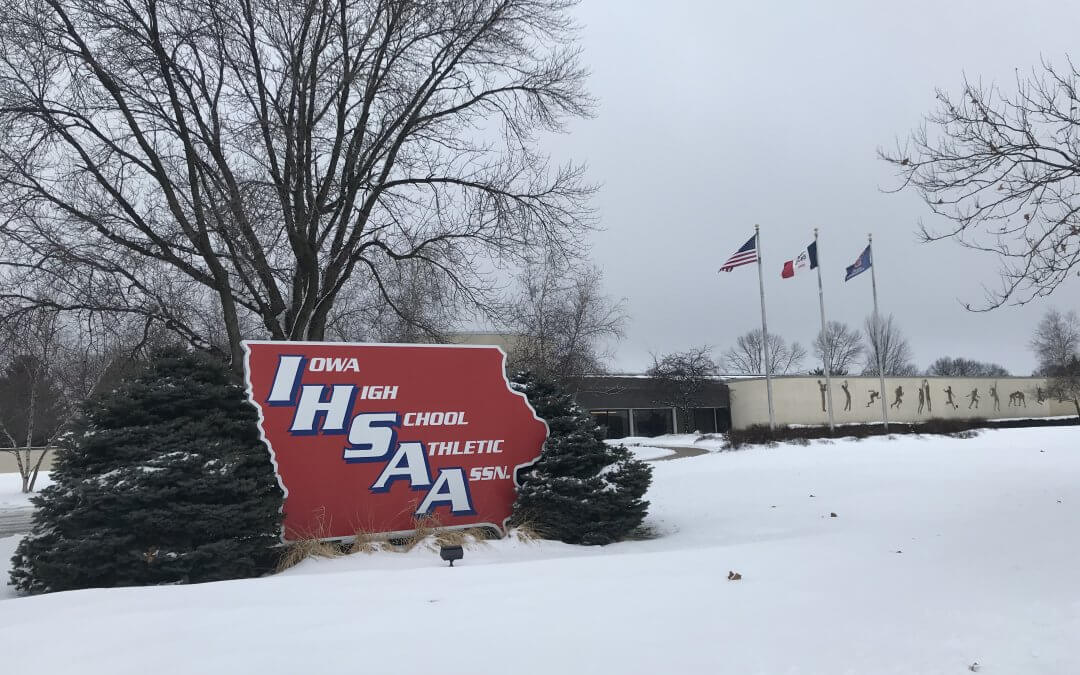 BOONE, Iowa – With preparations underway for another busy winter championship season, the Iowa High School Athletic Association’s Board of Control met Thursday to examine activities in February and beyond. The four upcoming postseasons – swimming, then wrestling, then bowling, and finally basketball – got most of the meeting’s action item attention, with concerns regarding football and sport classifications discussed at length.

Below is information on Thursday’s board approvals and other available links for each of the IHSAA’s four winter sports.

Updates on the 2020 district meets set for Saturday, February 8 have been published, including meet assignments and meet information. Swimming uses one season manual for its regular season and postseason competition.

Sites and assignments were approved by the Board of Control on Thursday and are now available for Classes 3A, 2A, and 1A in state qualifying meets set for Tuesday, February 18. Information on qualifying and the state meet is available in the 2019-20 manual, which contains both regular season and postseason procedures.

Update: Assignments and times have been updated since their original posting.

Postseason assignments will be released in two segments with Classes 2A and 1A made available on Friday, January 24, then Classes 4A and 3A scheduled for a Friday, January 31 release. These district and substate assignments then become pairings in February following coaches’ seeding meetings. The postseason begins on Monday, February 17 for 2A and 1A. The postseason manual was approved by the Board of Control at Thursday’s meeting.

The biennial release of football classifications, districts, and schedules is being delayed from its usual January drop. The Board of Control spent time Thursday discussing the football advisory committee’s recommendations from last month regarding the number of regular season games and playoff qualifiers, as well as ideas shared in a meeting of Class 4A athletic directors at the IHSAA offices on January 16.

The board previously considered and tabled a playoff and scheduling recommendation from the advisory committee and Iowa Football Coaches Association – eight regular season games and 32 playoff qualifiers per class, not including Class 4A – and did not vote on the topic Thursday.

In working with the IHSAA’s Classification Committee and Class 4A athletic directors, executive director Tom Keating and assistant director Jared Chizek shared with the board possible scheduling models to address competitive equity concerns. The IHSAA will seek feedback on the models, and the Board of Control set February 5 as the deadline date for an IHSAA recommendation regarding football districts.

Whaley joins Board of Control

Amanda Whaley of West Branch joined the board for her first meeting Thursday as an appointed representative of the Iowa Association of School Boards. Whaley replaces Greg Dockum of Johnston who served through December’s meeting. Whaley and her husband Chad have two children, Lauren and Matt.

Honorees for the IHSAA’s 2020 Wrestling Hall of Fame class were announced on Thursday, with five wrestlers and two coaches set to be featured on Feb. 22 at Wells Fargo Arena. The IHSAA has presented its Hall of Fame inductees before the Grand March at the wrestling finals since 1971.

Listed enrollment numbers and classifications are subject to change due to cooperative sharing agreements.